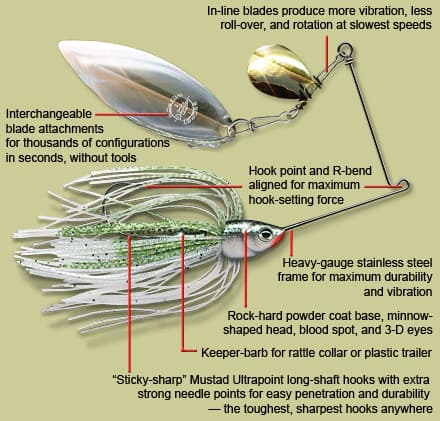 Spinnerbaits are one of the most popular bass lures in the world.

They are easy to cast, easy to retrieve, and easy to use. You don’t have to worry about making the cast, working the rod to get the lure out, or having to set the hook.

You simply reel in (or allow the spinnerbait to drift if you’re fishing cover) until you feel a slight bump or tap on your line. Then set the hook!

If you’re fishing from a boat, the sound of the blades buzzing on the retrieve will tell you if you’re hitting bottom, cover, or open water.

All you have to do is pay attention to what the blades are hitting and stop reeling when the blades stop buzzing.

Spinnerbaits are the ultimate lures and the secret weapon for bass fishing. Spinnerbaits are among the most versatile lures in the angler’s arsenal. They work great when fishing for largemouth and smallmouth bass, walleye, pike, salmon, trout, steelhead, catfish, panfish, and more.

The three main types of spinnerbaits include inline spinners, multi-bladed swimmers, and the Shad Rap.

Inline Spinner – The inline spinner is a long, thin lure that features two to three blades on the top arm. It’s buoyant and can be fished in open water and around heavy cover.

Shad Rap – The Shad Rap is a single-blade spinnerbait that gets its name because it resembles a shad darting through the water. This bait is less buoyant than multi-bladed versions, which means it performs better when fished near the bottom.

This bait is typically frog or crawfish shaped, has a long, slender body, and features one large blade that produces a lot of flashes. This lure has a unique design that can be cast a long way. It’s especially good for catching suspended bass from the bottom, but it also catches fish when fished in mid-water.

Of these three the most popular is the wobbling multi-bladed swimmer that has three or more blades. They can be adjusted to run at different speeds, from a slow roll to fast, splashing action. The more blades, the more flash they produce and the more impact they have on fish. But too many blades can make them hard to cast and manage.

Spinnerbaits do best when bumped up against a structure, also referred to as a “contact lure.”

They usually should be fished with the rod held up at about a 45-degree angle. This allows the bait to take advantage of the natural action of the water and helps it fall slowly into the strike zone.

Spinnerbaits run from the surface to about six feet, but they can run deeper in a strong current or if you add extra weight to the line. Experienced bass anglers report that spinnerbaits fished in extremely slow current (less than 1mph) should be fished on the bottom where they’ll have a better chance of picking up a bass that’s holding there. They should be allowed to free-fall until they hit the bottom, then snapped off the bottom, and then slowly reeled back in.

The ideal retrieve is a slow, steady pace. It should appear natural and not too fast so that the fish won’t have time to spook.

Bumper baits are spinnerbaits with an additional weight added to the wire keeper or hook. This extra weight allows the bait to run deeper and to cover more water, which increases the chances of a strike. Bumper baits are especially effective in fast current.

Spinnerbaits are most effective when fished around structures – logs, bushes, brush piles, rocks, docks, etc. Because they have a larger profile than crankbaits, they tend to catch more fish around cover than crankbaits do. Anglers often use spinnerbaits around weed beds or heavily-leafed trees.

When fishing with spinnerbaits, it’s important not to go too heavy on your fishing line. On the lighter side, I’d go with a 4-6 lb test. On the heavier side, I wouldn’t go above 10 lbs of test. The lighter your fishing line is, the easier you’ll be able to detect a strike which gives you a better chance of keeping the bass hooked.

Spinnerbaits are one of the best lures you can use when fishing for bass. You’ll never catch as many fish as you will with them. Some days the fish will be looking up, other days they may be looking at the bottom or out in open water. It doesn’t matter – if you’re prepared and bring your spinnerbait secret weapon, you’ll come home with a big catch every time.